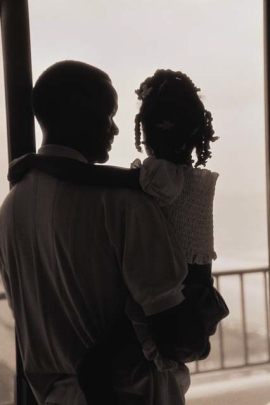 He sat by his daughter’s bed, holding her hand. He’d sat beside her bed and rocked her to sleep many times before, but this time was different. She’d been sick most of the night, and no amount of rocking seemed to comfort her.

“Daddy, I don’t feel good.” Her small and weak voice reached him through the darkness, and tugged at his heart.

“I know baby, but it will pass.” He squeezed her hand and she rolled over onto her side, facing him. He ran his hands through her dampened hair, where a cold washcloth had once been. It was hard to imagine this was the same little person he’d gone on a field trip with her school earlier that week. One minute she was fine, and the next minute she came down with the flu. Having four daughters, he had a lot of experience with sleepless nights. But no matter how much experience he had, he still worried each time.

“Daddy, my tummy hurts.” She curled up into a ball, hoping it would ease her pain.

“Just breathe,” he told her and began rubbing her back. “Just like this.” And he began to take in small shallow breathes and released them at a fast pace.

She opened her eyes and watched him. She lied on her back and inhaled deeply, and released it in small bursts.

She released the grip on her father’s hand and concentrated harder on her breathing.

“How do you feel?” he asked after a few minutes passed. He placed his hand onto her small stomach. “Better?”

“A little bit,” she answered, turning onto her side to face him.

He began to hum as he rubbed her back. And when her breathing began to soften, he knew she’d finally fallen asleep. He kissed her good night, knowing if he had to do all over again tomorrow, he would. Because even though her mother would have made her feel better too, he wanted to be the one that took away his daughters pain this time around.